Commissioned by C. L. Orr-Ewing MP in 1897, Rainbow was the first modern schooner built in Britain. Orr-Ewing set out to build the fastest schooner afloat and a yacht that would be equally suited to both racing and cruising; the result was destined to become one of G. L. Watson’s greatest masterpieces.

Rainbow’s maiden passage from the Clyde was accomplished in just 50 hours and set the tone for the reputation for speed she was to develop. In racing, Rainbow overshadowed all her competitors. Her record for the fastest timed speed attained by any displacement yacht was achieved in the channel when in a period of 4 hours she sailed 60 miles. Her log peaked at 16 ½ knots and the Duke of Leeds, then Commodore of the Royal Yacht Squadron, who was on board at the time recorded that when:

“Rainbow was sailing at her fastest, heeled over to a moderate but not great angle; there was not the slightest motion of any kind, the vessel being absolutely steady.”

In 1903 Rainbow was acquired by a German syndicate and re-named Hamburg. Reckoned by many to be the finest schooner afloat and capable of sustained speed offshore, she took part in the Atlantic Challenge of 1905. Initially ahead of Atlantic, Hamburg suffered some damage and hove to for repairs. In the storm that followed, her master opted to run before the wind for 2 days allowing her to be blown too far north. In the subsequent light winds Hamburg made good some of her lost time and followed Charlie Barr’s Atlantic over the finish line just under a day behind.

ENDING HER DAYS AS A TRADING SCHOONER IN THE FAR EAST

Like many of the large Victorian schooners, World War I saw Rainbow sold out of yachting and her new owners operated her as a trading schooner in the Indian Ocean. In September 1927, the career of one of greatest sailing yachts of all time ended in a Bombay scrap yard. In 1897, G.L. Watson was commissioned to design a Big Class schooner that would be the fastest afloat and equally suited to cruising and racing. The result was to become one of the company’s masterpieces and the first modern schooner built in Britain.

G.L. Watson & Co. holds the original drawings of Rainbow which makes the re-building possible. Her suitability for inshore and ocean racing as well as cruising has been proven by her track record. Her hull shape allows space to install modern systems; the weight of which need not compromise performance. The interior volume lends itself to truly spacious accommodation for both guests and crew. 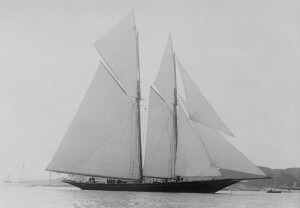 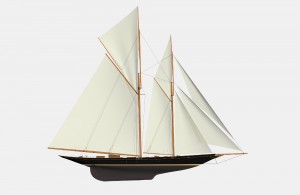