In April 1893, some 20 years into G. L. Watson’s trail blazing career, the royal sailing yacht Britannia was launched. The prestige associated with this order from the Price of Wales, Britannia’s revolutionary design, enduring beauty, speed and a 43 year career in the ownerships of King Edward VII and King George V have all contributed to the Britannia legend.

Britannia was built at D&W Henderson’s shipyard on the Clyde alongside her near sister, the America’s Cup challenger Valkyrie II. Her spoon bow was controversial and Watson was initially condemned for experimenting on such a prestigious commission, but it was not long before her admirable qualities were recognised and the perfection of hull form became known as the ‘Britannia ideal’.

In the great season of 1893, Britannia acted as a trial horse for America’s Cup challenger Valkyrie II and saw off the challenge of the Herreshoff designed Navahoe to dominate racing in British waters. The following year when America’s Cup victor Vigilant raced in Britain in what was mooted as a re-run of the America’s Cup races, Britannia dominated; upholding British racing prowess after the loss of Valkyrie II.

The introduction of a new rating rule in 1896 gave Watson the opportunity to out-design Britannia, but the arrival of the Kaiser’s Meteor II killed off both the King’s pleasure and his prospects of winning. In 1898 Edward VII sold Britannia, but soon regretted it and by 1902 she was back in his ownership and once again became a regular sight on the British regatta circuit. Inherited by George V in 1910, Britannia was updated and again raced successfully in the British Big Class. The lead provided by George V in fitting out Britannia for the 1920 season re-established the Big Class in the aftermath of World War I and paved the way for the likes of Cambria, Astra and the J Class.

Following Watson’s early death in 1904, all leading British yacht designers were involved in the regular updating of the royal sailing yacht Britannia. In 1930 it was Charles E. Nicholson’s turn and he designed what remains the world’s tallest wooden mast for her. In 1931 Britannia emerged rejuvenated to race competitively with the J Class against which she would add a further 15 firsts to her racing record.

Britannia’s last season was the summer of 1935, when the American J Class Yankee visited British waters, in what was the last great flourishing of Big Class racing. Then with the King’s health failing she was withdrawn from racing and on 10th July 1936 her great career came to an end. As per the dying wishes of George V, she was towed out to St. Catherine’s Deep off the Isle of Wight and scuttled.

Although not a sailor, King Edward VIII fully appreciated the affection that surrounded Britannia and after she was scuttled, he commanded that G. L. Watson & Co. be presented with a memento of what remains the most successful racing yacht of all time. This souvenir of Britannia is held in the G.L. Watson Archive together with the original drawings. 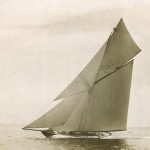 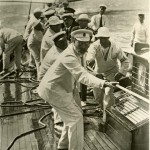 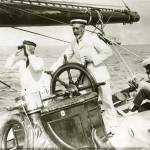 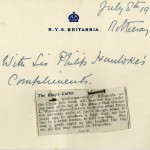 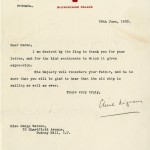 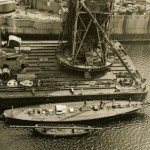 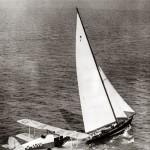