Born in 1864, the son of a bookkeeper, James Rennie Barnett was a native of Johnston, Renfrewshire. Barnett studied Naval Architecture at Glasgow University before becoming the apprentice of G.L. Watson. After a year working as a draughtsman at Dreford & Sons, Barnett returned to G.L. Watson & Co. in 1889 as Watson’s chief draughtsman.

In 1904 Barnett succeeded Watson as senior partner of the firm. His long career at G.L. Watson & Co. covered the development of the modern yacht from Britannia onwards and he continued to develop the firm’s tradition of handsome yachts. Barnett designed amongst many others; Nahlin, Blue Bird, Sunbeam II and Rainbow.

On his succession as senior partner Barnett was simultaneously appointed as consulting Naval Architect to the RNLI, a post he held until 1947. During Barnett’s time changes in lifeboat design brought about: increasing efficiency, better ranges of stability and improvements in operational safety. The RNLI recognised the great service of Barnett and his predecessor by naming two lifeboat types after them; the Watson and the Barnett, and they have since been described as ‘the fathers of the modern life-boat fleet’. On his retirement Barnett was awarded the RNLIs highest award, its Gold Medal.

William Smart was born in Glasgow in 1895 the son of a Grocer. Smart became a Naval Architect and joined G.L. Watson & Co. shortly after the death of its founder. In 1958 Smart took over from Barnett as senior partner of the firm. Smart was involved in the designing of some of the world’s most luxurious yachts along with vessels such as Chelsea andGiroflee. It was during Smart’s time that the first Watson MFV was designed along with the Glen Mallie Ferry.

Mr Smart retired from G.L. Watson & Co. in 1968. As Watson and Barnett had done before him, Smart continued to further the firm’s commitment to the RNLI and in 1947 he became consulting Naval Architect to the RNLI.

Allen McLachlan was born in Glasgow, the son of a Naval Architect. He served his apprenticeship as a Naval Architect in 1936 with Hugh MacLean & Sons of Renfrew. After serving in the Navy during WWII, he started designing high speed small craft and in 1948 became chief draughtsman in the RNLI hull department. It was during this time that McLachlan met the Director of G.L. Watson & Co., William Smart, who in 1958 offered him a partnership at the firm.

McLachlan’s move from the RNLI to G.L. Watson provided him with the opportunity to concentrate on the design of fast craft. McLachlan designed fast craft such as the Westcraft Watson range and offshore racers such as Big Moose and Ianthe which showcased the work of the firm and contributed to developing the field of offshore fast craft design. McLachlan retired from the firm in 1983. 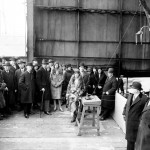 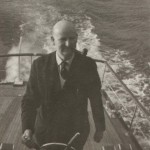